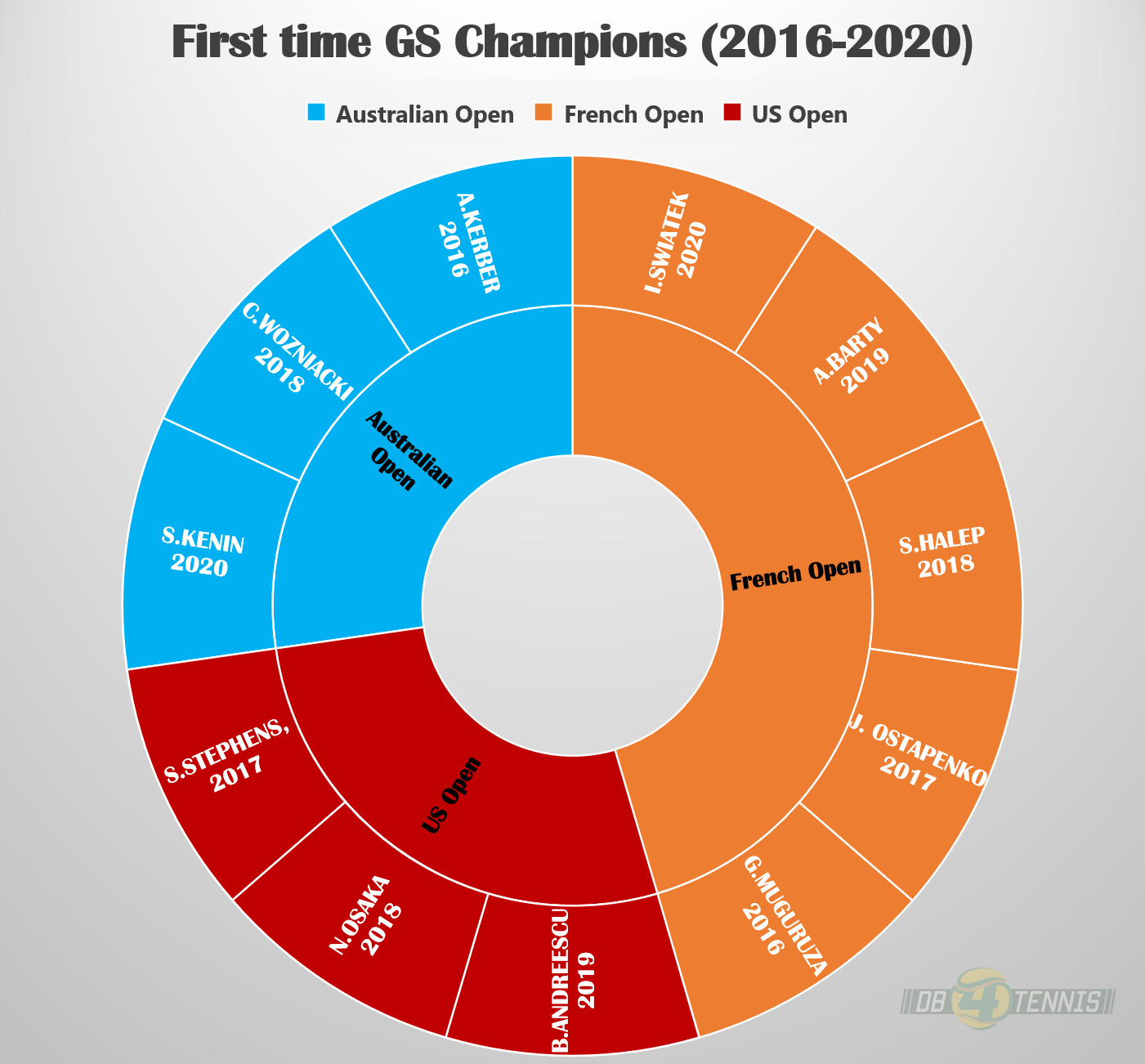 Since 2016, every season the WTA Tour nurtured at least 2 Grand Slam winners who
lifted the trophy for the first time in their careers. It is an extremely unfamiliar
territory in the terms of tendency in women’s tennis, since this is the first time in the
history of tennis that in 5 consecutive years, we have 2 or more new champions in
women’s singles.

DIAGRAM ONE
As the DIAGRAM 1 indicates this trend started at the Australian Open’16 where Angelique
Kerber won her maiden Slam, then 4 months later Garbine Muguruza broke through with
her triumph in Paris. In 2017, also at the French Open, the Latvian Jelena Ostapenko
claimed her 1st title and at the US Open, Sloane Stephens won her first (and as of today
only)major on her home soil. In 2018, we witnessed the most 1st timer champs since 2011:
Caroline Wozniacki in Melbourne, Simona Halep in the French capital and Naomi Osaka in
New York became champions.
One year later, Roland Garros and US Open inaugurated 1st time winners:
Ashleigh Barty and Bianca Andreescu.
Last year, Sofia Kenin at AO and Iga Swiatek at Roland Garros finished in the highest
spot.
Analyzing the champions per Grand Slam, it can be seen that

DIAGRAM TWO:
Regarding the stat of the championship titles distributed among the continents, Europe is
leading with 6 major titles (Kerber, Muguruza, Ostapenko, Wozniacki, Halep, Swiatek),
then North-America has 3 wins (Andreescu for Canada, Stephens and Kenin for US),
and 1-1 triumphs for Asia (Osaka) and Oceania (Barty).
Taking a closer look, it can be stated that 2 more names should be added to Europe upon
the pedigree and origin: Sofia Kenin was born in Moscow from Russian parents and
Bianca Andreescu’s mother and father immigrated from Rumania. But it is also true that
Garbine Muguruza was born in South America (Venezuela),then at the age of 6, her family
moved to Spain.
Another interesting facts: Except Muguruza, all of the European champions’ origin came
from Eastern Europe. Kerber’s both parents are Polish (she is dual citizen), just like
Caroline Wozniacki’s parents. Ostapenko is Latvian, Halep from Rumania and Swiatek is
Polish.

DIAGRAM THREE:
In terms of the age factor, again Europe is the most dominant!
Among the first time champions, the 2 European ones were the oldest at the time of
their 1st wins at Grand Slam: Kerber (28) and Wozniacki (27).
The youngest ones were Swiatek and Andreescu with 19 years old at the time of their
first major wins.
The 3 oldest players needed the most Grand Slam appearances to break through
(Wozniacki 43 – Kerber 33 – Halep 32 majors)!
As well as the 3 youngest ones needed the fewest main draw appearances to win a
Grand Slam (Andreescu 4 – Swiatek 7 – Ostapenko 8).

DIAGRAM FOUR:
The most maiden championships were born in Paris in Open-era (19) for the women.
Plus, in the last 5 years on the top of that consecutively there were 5 first time
winners! This is the longest streak (5 years) in the Open-era at French Open.
The all-time record of the longest streak at French Open in this regard dated back between
1955 – 1961 when 7 straight first time winners followed by each others on the victory
podium at the women’s side.
The 2 hard court venues (Melbourne and New York) are firmly standing in the second
position and the less break-through wins came from Wimbledon.

Posted in Analysis | No Comments