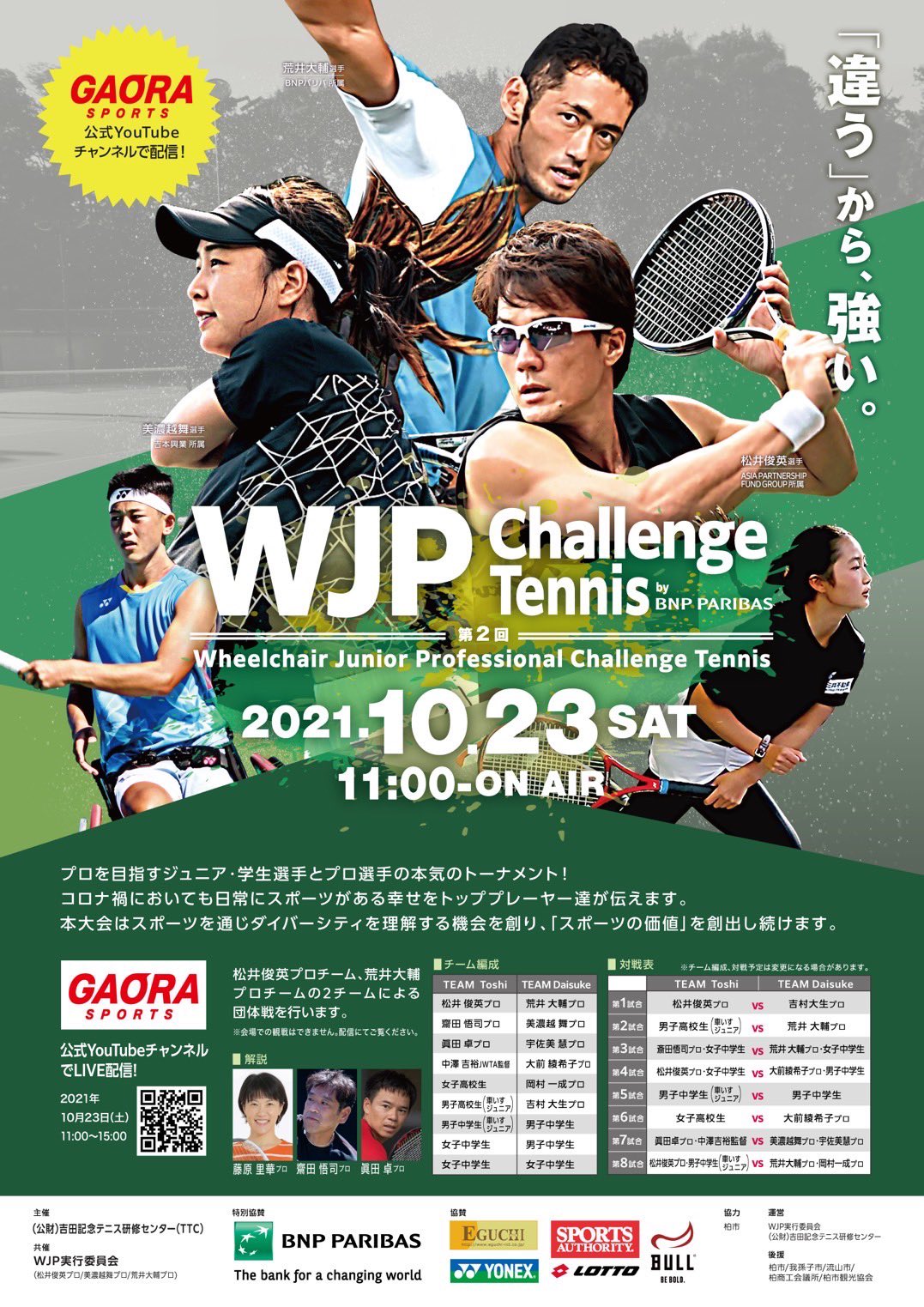 KASHIWA, JAPAN – Less than a year ago, when the idea of WJP Challenge Tennis born in Toshihide Matsui’s mind, perhaps he even himself did not believe that one day his vision would become a reality. Nevertheless the unforeseen outcome convinced and confirmed that it was worth the tremendous effort of many dedicated people: the event exceeded expectations, has been a major success. The 2nd WJP Challenge Tennis was characterized by the fact that the focus on promoting tennis, provide grants for junior and student players to participate in the same event along with pros and wheelchair players, thereby ensuring their competitiveness.

The purely novel initiatives of Wheelchair-Junior-Pro Challenge envisaged and proposed by ATP tour veteran Toshi Matsui, a dignified holder of the most peculiar record as the current oldest active professional player. (In this category, he surpassed even the great Roger Federer who stands behind him ‘only’ at the 6th position.) Having shared his brainchild with Daisuke Arai, the elite wheelchair player and Mai Minokoshi, the WTA pro, then they were later joined by Tomomi Itaya representing Yoshida Memorial Tennis Training Center (TTC). All refined Matsui’s idea with due diligence as well as forming joint forces in order to steer the WJC ‘chariot’ into the requisite direction.

The primary concept based on professional players clash along with wheelchair camaraderies and junior and/or students in the team competition which consists men’s and wheelchair men’s singles, mixed doubles, junior girl vs pro women’s singles and some new mixed pairs. This year Team Toshi and Team Daisuke faced each other in a 8 match-up series where there was no-advantage scoring, thus if the game is tied at deuce, the next player to win a point wins the game. Plus the wheelchair player continued to be subject to the ‘two-bounce rule’, which means a player can allow the ball to bounce twice and must return it before a third bounce. The second bounce can be inside or outside the court boundaries. They were later joined by Tomomi Itaya representing Yoshida Memorial Tennis Training Center (TTC) and the 2 main sponsors of the event: BNP Paribas and Kashiwa City.

The 2 teams’ lineups filled with illustrious wheelchair players such as Satoshi Saida, the pioneering wheelchair player and Paralympic gold medalist in doubles, Takashi Sanada and the team captain Daisuke Arai, both participated at Tokyo 2020 Paralympic Games. This should not come as a surprise when considering the fact that this event was hosted at TTC where wheelchair tennis players like the current Paralympic champion and iconic figure of sports, Shingo Kunieda also practice. This kind of exhibition tournament provided an enormous opportunity for juniors and students whose lost activity due to the influence of Covid to challenge themselves professionally and develop their talents. On the other hand, by promoting tennis it fosters growth of the fans and future players.

The participating team members and players are as follows:

Rika Fujiwara, the former WTA professional and excellent doubles player served as the official commentator of the WJP event. The nearly five-hour tennis show which was followed by the award ceremony and the press conference, has ended with the victory of Team Daisuke by 35-22.