The second seed Simona Halep is facing the No. 26 seed Flavia Pennetta who leads 3-1 against the Romanian player. They met 2-2 times on clay and hard court, except their last meeting this year, Flavia won the first three. Simona is bidding for her second Grand Slam final, while Flavia is looking for a chance to participate in her first one. Halep is the first Romanian to reach semifinal at the S Open since Irina Spirlea in 1997. She would be bidding to become the first Romanian to advance to the US Open final in the Open Era. Pennetta has dropped the most games (44), but Halep has spent most time on court (8h 29m). 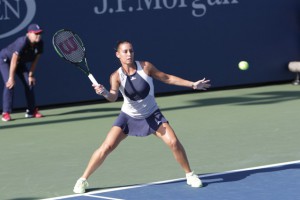