World No. 1 Novak Djokovic is bidding for his 16th Major final in the last 21 Grand Slams (since 2010 US Open). The Serb player is appearing in his 9th consecutive semifinal in New York and has a 5-3 record in this round. Defending champion Marin Cilic is on a 12-match win streak at US Open, however a 13-match losing streak against his opponent, and 0-4 at the Grand Slam stage. 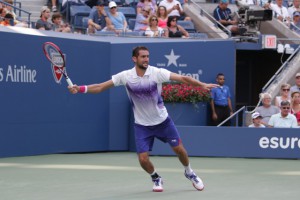