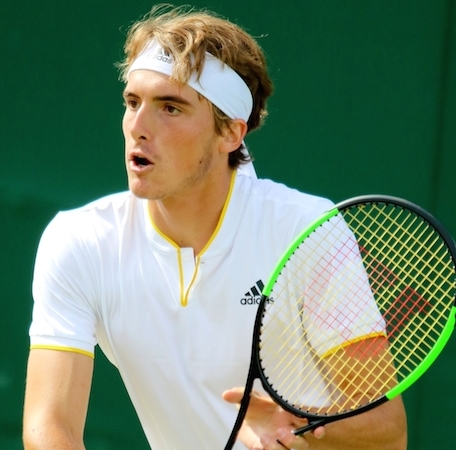 At midway (but not turning!) point of his missionary journey towards to Paris, we stoically witnessed the latest overwhelming one-week powerhouse performance of Rafael Nadal. The 31-year old Majorcan “committed” a hit-and-run tennis versus his newfangled challenger from Greece,  accomplishing the Mediterranean Double (Monte-Carlo + Barcelona) 10 times in his illustrious career. Although, the 11th victories in Barcelona for the left-hander was not in jeopardy for a moment, his recent contender won’t be afraid to set ambitious goals for the future.

Even 8400 fans, 17 Celsius and 40 km/h wind were not able to discourage Stefanos Tsitsipas from taking a dream start, winning the first 4 straight points of the match against the player for who he certainly craves for a while. Then a short interruption due to a light drizzle from the sky as well as a heavy topspin ‘storm’ from the other side of the court terminated his further ambition for the rest of the day. The former affected less, the latter has taken its toll on the Greek’s maiden final. By the end of the match, the sensational newcomer ran out of gas and the solely identical indicator was left between him and the world’s top ranked player, was the minutes both spent on the court (77) which was equalled with the Spaniard’s accumulated total number of titles (77) either. The scoreboard spoke for itself (6-2, 6-1), one of the ‘flawless, average day in Rafa’s office’ resulted his win No. 401 on clay. Nadal’s standard approach preserved the reminiscent of the classy medieval knights; it was inexorable, but merciful having allowed a modest 3-game enjoyment for the upcoming star. After all, it may sound more shocking then surprisingly if we accentuate that this extremely lopsided match at the Royal Tennis Club of Barcelona will be remembered one day as the first clash of the King of Clay and his prospective successor.

17 years ago, if only we could have been in Mallorca, when Boris Becker and Pat Cash were scheduled to play an exhibition match. Due to the unexpected injury of the German player, the organizers designated a 14 years old upcoming talent replacing Becker and tried to persuade the mildly upset Australian to accept him as an opponent. The former No.4. player’s frustration might have been understandable considering the fact that he would rather have played with his contemporary elite player than a local teen. In addition, playing on clay, frankly said it would have been the last thing what the Aussie wished on that day in May of 2001. To sum up, Cash first objected, then….lost. True, by a close margin, however the Wimbledon champ forced to congratulate his adolescent conqueror. Over his brief stop at the Balearic Islands, the prominent loser may have not pick up countless Spanish word, howbeit his mind flashed back forever the name of that boy: Rafael Nadal.

From that point, the saga is well-known; one month after the referenced match, a then 15-year-old lefty became pro and since then only 35 times proclaimed him as runner-up on his beloved surface throughout 6200 days ! His second-to-none 92% winning ratio on clay elevates Nadal into the stratosphere surpassing Borg (86%), Lendl (81) ,Vilas (80%), Djokovic (79%) and the rest of some all-time greats (Connors, Nastase, Wilander, Rosewall).

This brings us back to the point where we must change the player in the leading role! Nevertheless, it is pertinent to note that taking over the torch means always a burden (sometimes a burning one) for the recipient, especially in our case when the “donor” is  still active, a living legend who leads currently the ATP ranking and has no intention of departing the tour in the near future. Furthermore, there is no perpetual winning formula even playing your own A++ game or going beyond any human exertion gives you no guarantee (mostly not even hope) against Rafa. Counting the 4 most prestigious clay court tournaments in the calendar, there are 8 players who succeeded this impossible mission: in Monte-Carlo (Djokovic, Ferrer), in Barcelona (Almagro, Fognini), in Rome (Ferrero, Djokovic, Wawrinka, Thiem) and in Paris (Söderling, Djokovic).

The recent and youngest ever final opponent of Nadal’s career has been preparing to face the Spaniard for the past 10 years. He failed though and has yet bitter experience stepping into the shoes of Sisyphus from the Greek mythology with one, crucial difference. Tasting his ancient predecessor’s fiasco was inevitable, notwithstanding, Stefanos Tsitsipasis is on a steep learning curve of becoming not only a regular contender but a permanent threat. His achievements mentioning in superlatives based how consistent he competed the previous week highlighted the effort against one of the all-time greatest players is regarded more than just commendable! One battle is lost, but the war has just begun. The key for the former junior No.1 is to climb on the ranking and concurrently cementing his position as one of the world’s toughest clay court competitors among the pros. Warning message: Caution do not let your triumphant and lasting ascendancy be just a meteoric rise as you blaze briefly in the night sky and as quickly disappear. Hoping that his unequivocal talent can take him further…much more than just being Sisyphus.

To avoid portraying the Greek titan as the 2.0 version of Leonidas in an exaggerated and overrated manner after the one-sided final where he won not more than 34 points, the subsequent arguments will be generated some thought-provoking answers on a preventive basis:

a) The age-factor:  If we look at the stat of the breakthrough age for any Masters or Grand Slam title on clay in the Open-era, it can be stated that the first big ‘leap’ is coming after the age of 20 (Bruguera, Medvedev, Kafelnikov) and mostly 21-22 years old (Vilas, Lendl, Muster, Moya, Ferrero, Rios, Coria). Naturally, there are some exemplary exceptions:

Björn Borg – who triumphed in Rome at the age of 17, then 2 weeks later – on the day of his 18th birthday – he won his first major in Paris.

Michael Chang – whose most significant youngest-ever record dated back to 1989 when he became Roland Garros champion at the age of 17 years and 110 days, to become the youngest male player ever to win a Grand Slam title. He has never been able to regain his success on the red clay regardless adding another 3 low-level titles on this surface to this resume.

Mats Wilander – has also not yet reached the age of 18 when he could lift up the Trophy of Musketeers in the French capital.

Rafael Nadal –  the most lucrative inter alia, who started his winning streak of 24 matches at the age of 18 in Monte Carlo, followed by Barcelona, ​​Rome and at French Open, where he was crowned in Paris at age 19 and two days.

In this regard, Tsitsipas with his 19 years is in good train.

b) Reasonably extensive experience of matches: As above detailed, the way the Greek phenomenon played his inaugural final (under pressure, with shaking hands and tension, monkeys on his shoulder, lack of experience etc.), where both physical and mental meltdown were expected as well as the loss of confidence has been unavoidable. Due to the demand of Nadal and the title match itself, his game, his strategy has slowly fallen apart. While Nadal lost 35 games in 17 years on clay on the Tour,  the Athenian had the same number of total matches under his belt as a pro! In his rookie season (2017), his win-loss record was 4-10, which was improved 11-10 this year (at the end of Barcelona Open final). In this perspective, his progress continued unbroken.

c) Big wins: The peculiar feature and characteristics of greatness are reflected therewith by defeating the ascending numbers of higher ranked players. Alex de Minaur, Struff, Garcia-Lopez, Tiafoe, Khachanov, Cuevas, Karlovic, Goffin, Chardy were among the “Upset Class of 2017”. Last year, at the Shanghai Masters, John Isner could pass Tsitsipas pouring his sweat and blood in that 2 TBs, and Diego Schwartzman relieved happily after advanced into the final in Antwerp against him. This year the Argentine was not so lucky as well as Busta, Thiem, Vinolas, Shapovalov, Gasquet, Kohlschreiber (and lately Anderson) joined the list of Greek!

d) Guga : Who would not remember the decent and forever-smiling Gustavo Kuerten ?! The degree of the visual similarity between the legendary Brazilian and his reincarnated version is obvious for everyone: body composition, same height, long (lever) arms, big serve and powerful forehand, favorite surface. Eliminating the backlog, the knowledge gaps and deficit takes time and patience. If the Greek is half as successful as Guga,  the tennis community can be grateful to Stefanos!

Quick note about smile. Nadal did not give much space and time to cheer for Tsitsipas whose body language expressed his nervosity and being inexperienced at the trophy presentation. By hearing the Spaniard’s laudative words he finally managed to smile … the stage and the spotlight is still unusual, but if he keeps playing and fighting the way as he did, he will often find himself on the last day of the tournament on that podium. The only question is in the leading or in the supporting role?

e) Greek heritage: Reviewing his semi-final against Busta, it served as a clever proof and identified areas Tsitsipas needs to improve. First of all, the psychical fitness, strength and stamina, leg muscles, footwork are required immediate actions in order to turn into the first champion for his homeland. In 1973, Nicholas Kalogeropoulos was the first Greek who broke barriers as he advanced into the final in Iowa, where Clark Graebner defeated him. Ending the 45-year pause in Barcelona, Tsitsipas got one win away from becoming the first hellen player on the professional Tour who standing high at the end of a tournament. All is not lost, that is delayed…

From now on, the stakes are high and the bar is set only higher. In the history of the tennis Grand Slam, 22 players from Greece (female and male) were registered on the draw sheets, however not they did enhance the prestige of their country, but the ones who were born outside Greece, as descendants of second/third generation. Maybe instead of an exhaustive search, it will suffice Pete Sampras, Mark Philippoussis or Marcos Baghdatis to name a few, or the 2Ks (Kyrgios and Kokkinakis) in the their 20s still carry unexploited potential. Tsitsipas did the first giant step and  broke into the Top50 as the first player born on Greek soil. Eagerly waiting to watch a Greek home race between these young gunslingers at the majors!

On the night of June 5, 2005, a few hours after he gained the first trophy of his “La Decima” collection, Nadal and his team held the celebratory dinner at Cafe de l’Homme restaurant in the Eiffel Tower. The Spaniard invited Mats Wilander offering  a genuine, Rafa-esque gesture towards the Hall of Fame Swede. The surreal scene and action of changing the guards between the two legendary players on the top of Paris has left an indelible, unforgotten memory for the eternity.
As of today, Nadal is on the top of the tennis world, in his peak, ready for setting new highs, breaking records and just finished to give a great lesson to a new kid of the club. Nevertheless, Rafa knows better than anyone, once he will be “only” a guest at the champion’s party. The question is whether he can expect an invitation card from Tsitsipas?