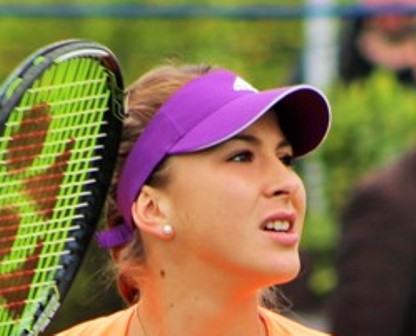 Seeing the future of tennis? Alias the torch is in good hands…

Just few minutes after one of the best matches (and biggest upset) of the year came to end, another memorable women’s match came to my mind, namely the Indian Wells final, 16 years ago. A young 17 years American teenager fought until the end in 3 sets (6-3, 3-6, 7-5) and won against the legendary Steffi Graf – in the final year of the German’s illustrious career. That time, the past and the future met each other and who watched that final, it has to be admitted that a new era has been witnessed. The life justified very soon this intuition. Two months later, Graf claimed her last (22nd) Grand Slam title in Paris, however only five months later in New York, Serena has collected her first major title with a win against – what a coincidence – a Swiss tennis player, who was then the No.1 player of the world, named Martina Hingis.In Toronto, Hingis’ compatriot, Belinda Bencic defeated Serena Williams tonight by 3-6 7-5 6-4. If Serena won the first set, she usually is not able to lose the entire match against almost every player. Except one. Bencic who had the toughest road to the final (beating Bouchard, Wozniacki, Lisicki and, Ivanovic producing fantastic tennis. She led 3-0, then 4-1 in the third set, but Serena came back from 4-5 and serving for equal the set.

At 30-ALL, she got the breakball (de facto and de jure matchball) and the Swiss player had no mercy at all.Dazzling rallies, mental duel (in the third set Serena broke twice Bencic’s service game) when again, we have seen the meeting between the past/present and the future. (Tennis) history repeats itself after 16 years? Who knows? Although, it may be the same storyline…In any case, one month before the US Open, Serena starts to prepare for climbing the summit held by Graf… (If she is able to succeed, her career would be framed with 22 titles between the US Open’99 and 2015!). And five months later, there will be another Grand Slam, where – seeing today’s final – you can easily add another name to the champions’ list..maybe with a Swiss player calling BB.The future is around the corner, knocking – impatiently – the door to break through…even though today it was only one match, but we have seen the future.
Ps: It would be disrespect to the others, if we mention only Bencic talking about the stars of the future generation. Maybe Serena’s soul will be calm down (like Gretzky, Jordan, Nicklaus, Montana listened to their similar inner voices when they chosen to retire) if she recognizes that her beloved sport is in good hands. As current rising star Bencic along more dynamic Madison Keys and increasingly more confident Sloane Stephens with hungry-for-success Muguruza, or the latest who broke into the Top10 – Karolina Pliskova along her last year’s form (and ego) searching Genie Bouchard in addition to the comeback kid from her serious illness – Victoria Duval and the 15 year sensation Cici Bellis, who will altogether carry the torch! We should feel fortunate seeing the eras of the Open-era from Court–BJK to the subsequent Evert–Navratilova and the era hallmarked by Graf, as well as the golden period of Serena. Now this familiar feeling is getting stronger and stronger again at the dawn of the new era, where with the first rays of light have been already outlined…

Posted in GS - History, Premier M and 5 | No Comments