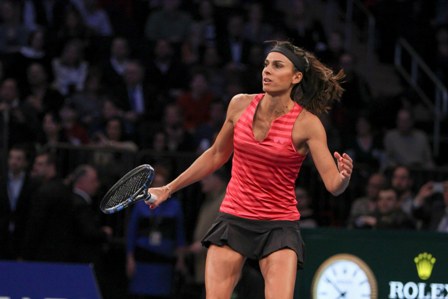 Sabatini took revenge on Seles after 25 years in MSG

After 25 years, Seles-Sabatini match in the MSG

NEW YORK CITY, USA – It was a typical November day in 1990 when Monica Seles and Gabriela Sabatini collided in the final of the Virginia Slims Championships at Madison Square Garden. That night, they met just the second time during their pro careers after Gaby beat Monica two years earlier 7-6 6-3 in the second round at the Miami Masters. However, the 90.0 version of Seles – still only at the age of 16 – was totally different; she reached the No.2 in the rankings, became the youngest ever French Open champion in the same year as well as the dominant force in the women tennis. The WTA Tour Championships final was the only one event in the women tennis calendar (until 1998) which required a best-of-five format from the year’s ending champion. Last time in 1901, at the US Nationals (predecessor of US Open) played two ladies a 5-setter when Bessie Moore defeated Myrtle McAteer in the Challenge Round for the title. 89 years later, the champions of Roland Garros and US Open of 1990, needed (again) 5 sets….and 3 hour 47 minutes to declare Seles as the youngest winner in the season-ending tournament. In addition to the four above-mentioned players (Moore, McAteer, Seles, Sabatini), only Steffi Graf, Martina Hingis and Anke Huber played 5 sets in the in the 20th century. Actually, in the last 115 years, namely since 1996 (when Graf beat Hingis), we have not witnessed any best-of-five marathon in the women tennis.

To commemorate the 25th anniversary of that classic match in WTA Finals match, Gabriela Sabatini, 44, and Monica Seles, 41, were itching for another chance to play and show the world that they can still. Since their retirements, both Hall of Famers rarely played, but they decided it was worth training to perform one more match-up on the big stage. This match was the first meeting of any kind between them since 1996! Sabatini said on her decision to participate in the event: “From the moment I made the decision, I thought it be nice to be back here again. Here (in New York) I played my best tennis, at Madison Square Garden and in New York. Just thinking of that, it was very attractive to me and that’s really the reason I’m here.” Her opponent, the nine-time Grand Slam champion answered the following on the same question: ”I just remember it was a five-setter. We both wanted to win it. It comes down to – I remember being so tired after the match I think – it was so long ago. That’s why it was so special to be back for both of us. To play against Gaby in the Garden, to put both our bodies through a lot of training – we both trained a lot the months coming into it, really changed our lives and schedules for it, and really at this stage in our lives, we really just wanted to do it. There was no other factor involved.”

The first relevant momentum of the highly anticipated match came at 2-2 when Sabatini broke Seles’s service game and did it again at 6-4 lead. Although Seles immediately broke back by love, she could not stop the Argentine player who took revenge after quarter of century and won 8-5. It was their 15th meetings and Sabatini improved her record to 4-11 against Seles. Her last victory was in 1992, since then she had a 8-match losing streak versus her former archrival.

At the press conference, the winner shared some thoughts on her preparation for this evening:

About the match itself, Sabatini said: “I think we were a little bit nervous early in the beginning, there was some tension, but we expected that to happen. I felt very good afterwards. I think we played some nice tennis and stepping out on this court again was just amazing. I think this is why me and Monica accepted to play this match again, because we wanted to be in the front of this crowd again.”
Then, both players were asked about if they have a chance to play another Grand Slam final which will be their choices? Here is the audible version of their answers which were – surprisingly – the same:

When Sabatini was asked about her toughest opponent, she said: “I played against Martina Hingis a couple of times and she was very tough to play against us. Arantxa Sanchez Vicario, because she is a big fighter. Until the last point you knew the match wasn’t done and that you had to work hard.”

Asking about today’s game, she added: “It is different. I think there is more power these days. Physically, these girls now are hitting the ball very hard. In the past we had Monica (Seles) and Steffi (Graf) who were also hitting the ball hard, but today I think everyone is hitting the ball hard. Before I think you would see more variety in the game, coming to the net, playing more slices and these days you see more of a power game and it’s very good.”
Finally, Sabatini talked about how she started playing tennis: “In my case I started when I was six year’s old and it was by coincidence that my family became a member of this club and started to play tennis…From the first moment I touched a racket I loved it, and I found my passion. I was playing tennis all day long nonstop. I think it’s important to have to support of your parents to take you around to the tournaments.”
Then, the press turned to Monica who also shared some details about her preparation for this match:

Closing the post-match press conference, Seles talked about the BNP Paribas Showdown: “You get all these offers to play singles, doubles. There’s a reason when you retire, you become selective and this one was very out of the box. I’m a big fan of this whole BNP Paribas match because it does bring some tennis besides just the U.S. Open to New York. I was one of the people who was very sad when the season-ending WTA Championships left New York because I think it was just an amazing home for the three-out-of-five-set finals. It just made it such a unique event. For me, it was very disappointing when it left. I think this event, at least once a year, brings some tennis for the fans in a different situation than let’s say the U.S. Open where you can’t really get up close to the players as you can maybe here. It celebrates World Tennis Day. For me, really the driving force was Madison Square Garden, New York, the fans, and playing somebody I admire both on and off the court, Gaby.”