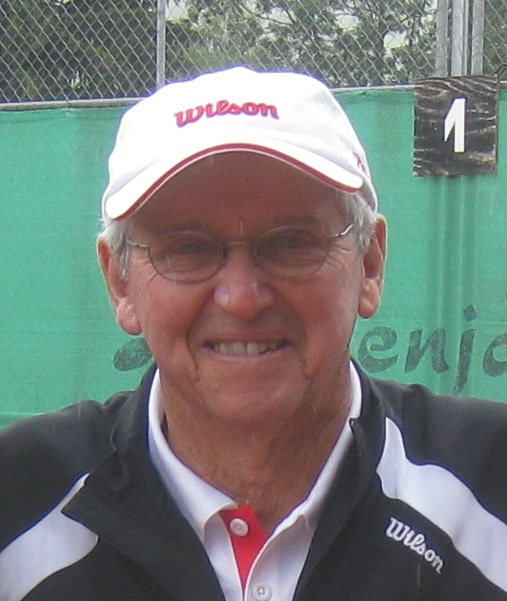 he male tennis player who owns the record of the most Grand Slam titles for a male (including all disciplines) with 28 titles (16 singles and 12 men’s doubles) told a story to Andreas Kuharszky about his first meeting with Asbóth.

Australia that played … I was seventeen years of age and I was chosen in the Davis Cup Team to represent Australia as a promising junior. Harry Hopman was the Davis Cup Captain and we lost the challenge round at Christmas time to America Trabert and Seixas played Hoad and Rosewall, and we lost three matches to two. So, in 1954 we made a tour overseas and the Australian team was Ken Rosewall, Lew Hoad, Rex Harwig, Mervyn Rose, Neale Fraser and Ashley Cooper and myself were sent over as promising juniors.

And when we arrived in Paris we were placed in the draw, because there wasn’t any qualifying back in 1954 and because Australia was, we were one of the champion nations that time, they put Ashley Cooper and I, even though we were seventeen years of age into the main draw.

So, I was very excited about playing there and Harry Hopman said we are going to the draw. It’s good experience to see how they do the draw for the tournament in all the different majors, so, I went to the draw and when my name came out and I was excited to see I was playing József Asbóth from Hungary. And I haven’t … I didn’t know who that was, because I was very fresh in the game and so I was excited, I thought I may have a chance to win the first round.

So I raced into the dressing room and Ken Rosewall was there and I said:

“Ken! I may have a chance to win a match in the first round, I play József Asbóth!”

And he said: “well, there are five fingers and thats about how many games you will win in three sets.”

And I was dying to find out a little bit more about Asbóth, but we were playing the next cup… the next day. And I went out to the court and this elegant gentleman came out just before the match in long pants and I thought that he was the umpire, so I introduced myself and he said:

“I am József Asbóth” and I said to the gentleman “I am playing József Asbóth and I am Roy Emerson” and so that is how we met on the court.

And so we warmed up and Ken Rosewall was sitting in the stand. And Asbóth in the warm-up didn’t miss a ball and he had so much touch he could really make the ball talk and I knew straight away that I was in a lot of trouble.

So, the match started and he was absolutely toying with me weaving me from side to side drop-shotting, so that I could just nearly get to it and then the next ball is over my head and I am running around like a blue ass fly and covered in dirt because I am perspiring so much and he hasn’t even got a crease in his long pants. And Rosewall was killing himself laughing in the stands, about me being taught a complete lesson. And so the match went on and on and on and I am battling and after two sets I thought I was in pretty good shape and I am getting pretty exhausted, because he is just controlling the ball so well and just making a fool of me on the slow clay.

So I lose and go to the dressing room and Ken said: “well, did you make, did you get five games?” And I said: “barely got five games.” And… and I said: “who the heck is this guy?” And he said: “well, go out and have a look at the honor board outside”, where they have, you know a list of all the past winners.” And I go out there and here I see that he won the French Championship and you might look up the date and I think it was in 1948 that he beat Eric Sturgess from South Africa in the final and it was the first tournament after the World War II. And then when I saw that he won the French Championship I didn’t feel so bad. … And that was a great lesson for me that I didn’t know how to play the game and I had to work on my game and see if I could get as much control as József Asbóth had on all of his shots.

The audio record and its transcript are greatly appreciated and credit to Andreas Kuharszky!