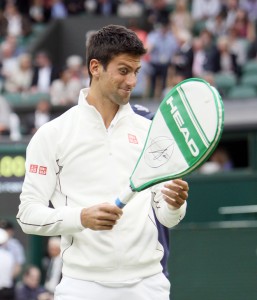 3. Can Djokovic gain his 5th Australian Open championship (in 7 years)?
If the answer is yes, Novak will be the record holder at the Australian Open in the Open-era (the absolute record belongs to Roy Emerson with 6 titles);

4. Since 2005, Djokovic has 11 consecutive appearances in Melbourne, and every time when he got through the quarterfinals, he always was crowned as a champion! Furthermore, he has a flawless, 100% record in the finals (4-0) (only Agassi has the same record among the players with minimum 4 final appearances);

5. Can Federer win his record 18th major and his 5th Aussie title? Since 2004, he always reached at least the semifinals every year, however, it is already 5 years gone since his last triumph. If he just goes into the final, Roger will overtake his coach (Edberg) in the category of “appearances in Aussie final” (currently Edberg and Federer have advanced into 5-5 finals);

6. Can Andy Murray finally have a breakthrough in Melbourne? He is still chasing his first Aussie title after losing 3 finals. If he wins here, he will be the first player from United Kingdom who wins this championship in the Open-era;

7. Canada, Japan or Bulgaria goes into the record book? I mean, in 2015, we can see the first Canadian (by Raonic),the first Japanese (by Nishikori) or the first Bulgarian (by Dimitrov) Grand Slam champion in the men’s singles category?

8. Can we expect any US-success in Melbourne? The answer is relatively easy: likely no. Last time, when an American player took the trophy was in 2003 (Agassi). The last reasonable result was achieved by Andy Roddick reaching the quarterfinal 5 years ago;

9. Any chance for an Aussie celebration? No way. 39 years ago, Mark Edmondson was the last “domestic” player who won the title and the last Aussie finalist was Hewitt exactly 10 years ago….

Lleyton Hewitt will be a record holder with his 19th Aussie appearance in the Open-era. (He steps ahead of Fabrice Santoro who has 18 at this moment.)

Both Rafael Nadal and Novak Djokovic have played 49 matches at Australian Open. Which player gonna have more in two weeks?