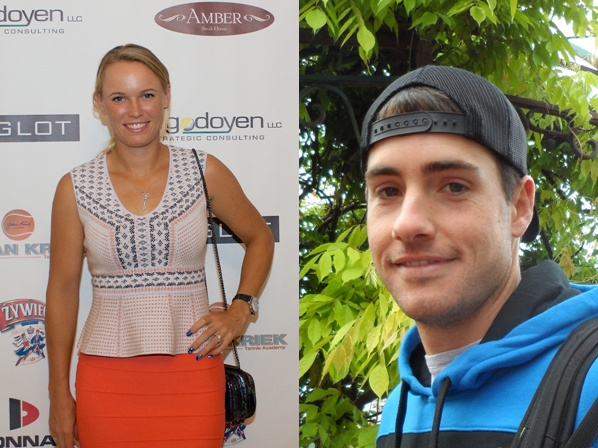 Hilarious mixed doubles by Wozniacki-Isner at the press conference

Although John Isner was able to rule his game plan flawlessly on the court (defeating Malek Jaziri in 3 straight set), he failed to conduct his own press conference because of a guest’s appearance of Caroline Wozniacki.

The currently highest ranked US player and the former world No. Danish player were ordered to hold their pressers at the same room. Isner was late and it costed him a lot…the finalist of last year showed up in the audience in a second and gave hard time for one of the best-server of the tour. Both players exchanged some funny words, joked around and made the post-match conference so memorable.

Here is the official transcript of their banter:

John Isner: I’m happy to get off the court today in a quick fashion ala Caroline Wozniacki.I don’t win many matches like that. I don’t win 0-0 like she does.
Caroline Wozniacki: Just because you have been playing really well leading up to the US Open, you’re close to the top 10 again, doesn’t mean that you should push my press conference out. I would appreciate you being on time.
J.I.: Now that I’m close to the top 10, Caroline is actually talking to me again. When I was ranked like 90 she would walk right by me. If I could get in single digits I think I can get some of Caroline’s attention. That’s my goal.
C.W.: I was standing in the hallway and you walked straight past me.
J.I.: I didn’t see you.
C.W.: He says, I didn’t see you. It happens twice in a row and I said ’Well, then look down.’
J.I.: I have to get in single digits. This is my incentive. Caroline talks to me if I get in single digits.
C.W.: Will you be on time then?
J.I.: Yes, I apologize. That’s my bad. Are you next?
C.W.: I’m not here just for fun (laughter).
J.I.: You never know.
C.W.: No offense.
J.I.: I thought you really wanted to watch my press conference.
Question from a journalist: What do you think of Wozniacki’s chances here at the tournament? She’s done well, but…
J.I.: Interesting. No, yeah, Caroline’s got as good a shot as anyone. Obviously Serena is the favorite, but she’s a finalist here last year. She’s done it – two-time finalist, right? See? She’s made the finals here twice.
She obviously likes playing here. She’s comfortable in the city, has an apartment in the city. This tournament, she always has played well here, and she’s off to a good start again.
Question from a journalist: Talk about the rumor that you and Wozniacki will be playing mixed doubles in Australia.
J.I.: Ewww, she wouldn’t want to play with me.
C.W.: I actually asked him. He turned me down.
J.I.: I’m old, Caroline. I can’t do that. I have to just focus…
C.W.:Stop making up stories. Just tell the truth.
J.I.:Yeah, she actually – you did actually – I said no one time to Caroline at a mixed – stupid me. As I said, I’m old and I’ve got to focus, put my feet up after I play. I can’t be out there.
C.W.: I know you have a lot of favorite female players, but who is your favorite?
J.I.:(Laughter) What is this?You know I love you, Caroline. You’re one of – Caroline, Serena…
C.W.: I asked for one.
J.I.: No, I don’t have – I’m probably closest with you, so I would say I do like all the Americans, but I’m closest – we have great rapport, as you guys can see. Caroline is a good friend of mine.
C.W.: Right answer.
J.I.: She gives me a lot of s-h-i-t all the time, and she’s doing it again. That’s what good friends do.