Roger Federer became the only player who reached 3x (2005-06, 2019) in his career the consecutive finals of Dubai Tennis Championships, BNP Paribas Open & Miami Open in the same year and won at least 2 of these 3 tournaments. Roger Federer broke the tie with Novak Djokovic who completed this feat 2x (2011, 2015). 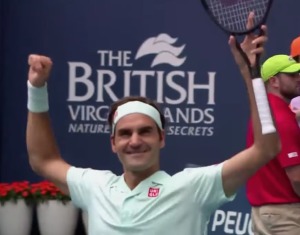