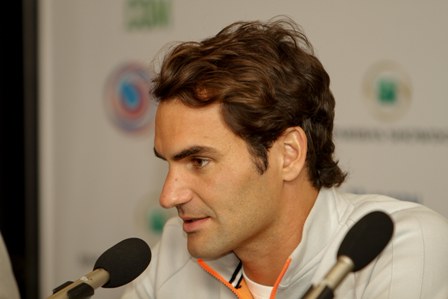 Before the Feds’ matchup, the 23 years old Bulgarian, who is also called as Baby-Federer, had a 0-3 record against the Swiss phenomenon and was not able to take a set during their previous meetings. Asking him what it is like to play Roger Federer, Dimitrov said: “It’s never easy. He is trying hard every time. Obviously it is an amazing experience for me to be out here and participate in such a big venue and against him and such a day definitely means a lot to me. This is my first time and I’m never going to hide my excitement, but I just want to go out there and really embrace the whole atmosphere and pick up the game. It’s always a pleasure when I play against him even though I’ve lost the last three times. If you put that aside, he’s a great guy on and off the court so it will be a pleasure to play with him.”

Federer who won two titles of 3 events this year (Brisbane and Dubai) shared some thoughts about when he saw Dimitrov first time and how the young talent’s game has improved and enhanced since then. “I don’t remember when I saw him play for the first time. I don’t remember if it was a Friday or a Saturday. I think we played for the first time in Madrid together indoors. It was a practice, and I couldn’t believe how he was playing and how similar he looked to me. I was like “oh my God, this is crazy”, but you do see the differences clearly now. He has had his own great career, but I do always find it fascinating and interesting following young players and seeing their careers evolve, and Grigor has done a nice job of going from juniors to pros and now he is clearly an established player who is really difficult to beat and has the future ahead of him. I wish him only the very best and I am very excited to play him. It’s going to be fun”.

Yes, actually it was! Dimitrov took the first set easily, then the current No.2 of the world turned the tide and did the same in the second to equal the match. The decisive set had a little drama, both players could have turned the match in his favor and by the end of the evening, the fan favorite Federer slipped the victory from his hands. Even though, he lost to his challenger 6-2, 1-6, 7-5, they gave some brilliant rallies and entertaining moments for the crowd in the world’s most famous arena, including Placido Domingo, Jim Caviezel, Lara Spencer and James Blake.

At their post-match press conference, both players gave compliments to each other: