NEW YORK CITY, USA – José Luis Clerc, the former professional player from Argentina who won 25 ATP Tour singles and 2 doubles title gave an exclusive interview for www.db4tennis.com. He talked about his life and career, the tennis in his home country, his greatest moments at the professional tour including some special stories which you never heard before.

Clerc reached the semifinals at Roland Garros two consecutive years. In 1981, in the 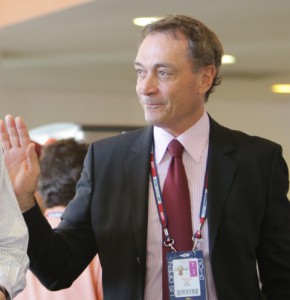 quarterfinal beating Jimmy Connors in an epic 5 setter, then he faced Ivan Lendl who survived a match point in the fourth set.This changed the momentum (maybe it would have changed Clerc’s entire career) and he  eventually lost in 5 sets against the top Czechoslovak player who advanced into his first Grand Slam final. In less than 48 hours later, Lendl had to play another 5 setter against Bjorn Borg, and it was too much for the fatigued No. 5 seeded player. If Clerc hadn’t pushed Lendl to the limit, he probably would have had better and real chance versus Borg to win his maiden Major final. The rest of the story is now history; Lendl lost his first 4 Grand Slam finals and this negative record (0-4) would have burden him in his entire career and gave reason to draw parallel with Andy Murray‘s Grand Slam career. Sometimes a single rally can change lives, careers and you can be a part of the history, as José Luis Clerc’s case demonstrates that thesis.

In 1982, the rising star, Mats Wilander was his opponent in the semifinal in Paris and the Swede talent defeated Clerc in 4 sets, then beating Vilas in the final winning the French Open!

Posted in Interview | No Comments