The Canadian Davis Cup team is tied with Japan 1-1 following the opening day of action at the Davis Cup by BNP Paribas World Group first-round tie in Vancouver. The two No. 1 players of their team secured victories on Friday, with world No. 6 Milos Raonic defeating Tatsuma Ito 6-2, 6-1, 6-2 and world No. 4 Kei Nishikori beating Vasek Pospisil 6-4, 7-6(5), 6-3.

Canada as No. 9 (6728.13 points) and Japan as No.12 (4122.50 points) on the ITF Davis Cup Nations ranking meet each other 7th times in the history of the Cup. The Country of the Rising Sun has an excessive dominance and leads 6-0 the head-to-head record. The winner of this tie will earn a spot in the quarter-finals of this year’s competition and in the World Group for 2016, while the loser will need to participate in a World Group play-off in September in order to maintain its position in the elite 16-team category.

The tie is contested on an indoor hard court at the Doug Mitchell Thunderbird Sports Centre on the campus of University of British Columbia. The Canadian Davis Cup squad consisting of Frank Dancevic (Niagara Falls, Ont.), Daniel Nestor (Toronto, Ont.), Vasek Pospisil (Vancouver, B.C.) and Milos Raonic (Thornhill, Ont.) along Canadian Davis Cup team captain Martin Laurendeau looks to advance into the World Group quarter-finals for the second time in its history. The stake is the same for the Japanese team who is led by current world No. 4, Kei Nishikori. Besides him, Japanese team captain, Minoru Ueda nominated Tatsuma Ito, Go Soeda and Yasutaka Uchiyama for Japan.

The official draw which took place at Cecil Green Park House on the campus of the University of British Columbia is the following: 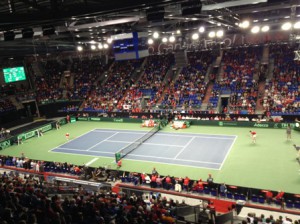 The opening ceremony was followed the first singles match between Milos Raonic and Tatsuma Ito in front of the almost sold-out crowd at Thunderbirds Sports Center which was transformed from the ice rink to host Davis Cup fourth times in the history of the venue.
Raonic broke in the sixth game of the first set to take a 4-2 lead and claim firm control in his duel versus Ito. The 24-year-old hit 19 aces, won 86 per cent of his first serve points, and never faced a single break point. He collected the opening victory for Canada in just 88 minutes. 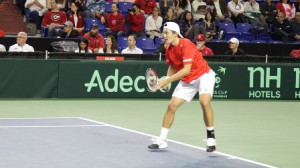 “I think I played a solid match,” Raonic said. “It was good to start that way being the first match of the weekend; you don’t know how things are going to go. So I was very happy with how I played. Answering the question at the on-court interview regarding his aims at the Majors this year, he said: “The goal is to keep getting better and better every day. For 2015, I want to make long runs at Grand Slam.”
Half an hour later, at his press conference, Raonic answered the question regarding some elements of the games where he should improve.
Question: „Milos, you did not have a comeback from 0-2 during his GS career. As well as in 2014, you lost crucial tiebreakers in Melbourne (vs. Dimitrov), in Paris (vs. Djokovic), at USO (vs. Nishikori) plus this year vs. Djokovic at Aussie Open. These kinds of elements of the game can make the difference to reach your main goal to reach a GS final?”
Raonic emphasized that he is considering that his game including his entire tiebreaker stats is improving and he feels to be capable the breakthrough at the Grand Slams. He doesn’t give any value to the referenced statistics.

In the second match of the day, Pospisil fell to Nishikori in a closely-fought three-setter which saw Canada’s No. 2 player have his chances. The second set was Pospisil’s best opportunity to equal and come back into the match, as he earned two break points to Nishikori’s zero. As well as in the tiebreaker, Nishikori’s top-level experience came through when he won 3 crucial points at 4-5. Though not much separated the two athletes statistically, Nishikori captured the triumph in two hours and 18 minutes.

At the press conference, Pospisil was asked:
Question: „Vasek, you lost many easy points and won a lot of difficult rallies. It seemed that the home soil was sometimes advantage, other times disadvantage. How did you see and feel inside this on the court?”
You can listen the answer of Pospisil:

“The two No. 1s played respective to their ranking,” Canadian Davis Cup team captain Martin Laurendeau said. “Milos played a really good match, he was just too good. Kei competed well and came up with some shots and he dug out of those sets that went deep. So he came out on top and did his job as No. 1, but we knew the doubles was going to be a key factor and it’s shaped up that way.”
Similar to 2013, when Canada played in front of spirited crowds at the Doug Mitchell Thunderbird Sports Centre en route to reaching the semifinals, the first day featured a large and loud environment.
“It’s a lot of fun to be playing in this atmosphere,” Raonic said. “It makes those tough moments a little bit easier and when you get going it carries you through. In the beginning it was very loud both ways and then I feel like the way I was playing it gave possibility for the Canadian crowd to uprise.”

Play will resume on Saturday at 1 p.m. PT with the doubles match, scheduled to feature Canadians Daniel Nestor (Toronto) and Pospisil against Go Soeda and Yasutaka Uchiyama. The team captains have until one hour before the match to change their nominations. There is a lot of speculation around that Minoru Ueda will designate Nishikori as a member of the doubles team.
The tie will conclude on Sunday with the two reverse singles matches, scheduled to begin at 1 p.m. PT.