Rest in Peace Alexander Volkov who was-  1⃣st player from URS/  who reached SF in singles at US Open Tennis Championships (1993);– 1⃣st player in Open-era who represented a country under  diff. flags; (URS,CIS,RUS) +reached at least the last 16 in singles at Grand Slam for these 3 nations;–  1⃣st  player who won Kremlin Cup by Bank . . . 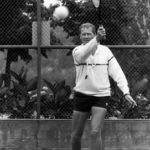 Last Saturday – on July 27 – Founder of Professional Tennis Registry (PTR),Dennis Van der Meer, passed away . Dennis was more than the founder of our great organization – he was the patriarch of our PTR Family, and he brought tennis coaches together. Dennis was a mentor, friend, educator, and advocate for countless tennis coaches . . .

Posted in General, Obituary | No Comments

He was born in Bristol, educated at Millfield School, in Street, Somerset. He started playing tennis at Fishponds and Bristol Lawn Tennis Clubs at the age of 11. In Davis Cup, he represented Great Britain in two ties (1-2 record). In 1968, he made the third round of the men’s singles at the French Open . . .

Posted in Obituary | No Comments