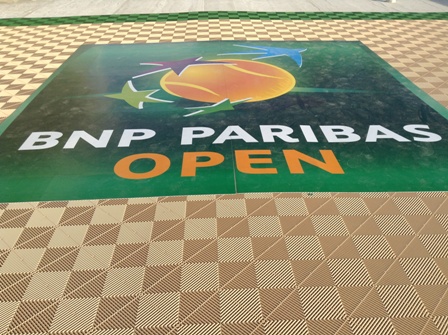 INDIAN WELLS – Novak Djokovic reached another relevant milestone in his professional career when he accomplished his impeccable mission in the Californian desert. The world No.1 player who lost only 2 matches (vs.Karlovic in Doha and vs.Federer in Dubai) this year, showed again his absolute dominance in the men’s tennis during the entire tournament. By becoming 4th time champion of Indian Wells, he achieved 4 remarkable benchmarks:1. defending the title which represents now his 50th one in his extremely rapidly expanding collection; 2.passing Boris Becker in the category of career titles (49) 3.equaling Federer’s fourth BNP Paribas Open trophies as well as tying Ivan Lendl‘s Masters title (22).

Inside the Tennis Garden, behind the media room, a giant poster proudly proclaims the 40th anniversary of the magnificent tournament. Celebrating means to remember; remember the magical moments of its own history, the unforgettable matches, the icons and legends from the first (Jimmy Connors) to the latest champion (Novak Djokovic). The level and rank of the tournament speaks for itself; it says a lot about that except 4 former winners (Higueras, Stefanki, Nystrom and Ljubicic) of the competition, every champion appeared at least in one Grand Slam final. (In 1980, the tournament was canceled after the quarterfinal round due to heavy rains.) 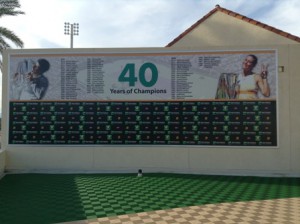 Champions of the last 40 years

The venues changed a couple of times during the early years; Joel Drucker wrote an excellent article which summarizes “The 40-Year journey” as follows: “The tournament’s 1976 debut (on March 22 exactly on the same day, when Djokovic defeated Federer 6-3, 6-7(5), 6-2 in the final this year) at Mission Hills in Rancho Mirage was an immediate success, highlighted by the presence of the top two players in the world, Jimmy Connors and Bjorn Borg. Five years later, the tournament relocated a few miles east to La Quinta Resort. By 1987, another new facility in Indian Wells, the Hyatt Grand Champions, was built. But by the late ’90s, as fans poured into the grounds, as the ATP and WTA joined forces to create an engaging dual-gender event, it was time to once again ponder change. Tournament director Charlie Pasarell and his partner Raymond Moore reviewed many options, including possible moves to Las Vegas, Scottsdale, Tampa Bay and even Rio de Janeiro. But in the end, the solution was close at hand: 189 acres of hardscrabble land at Washington Street and Miles Avenue.”