European men rules Indian Wells’19! After 1987 and 2015, this is the 3rd time in Euro BNP Paribas Open tournament history since 1974 that all of the last 8 players on the men’s side were born in Europe! In 1974: Stefan Edberg, Miroslav Mecir, Mats Wilander, Jakob Hlasek, Yannick Noah, Thierre Tulasne, Boris Becker and Emilio Sanchez. . . .

Indian Wells Masters: So far the most bizarre

Bizarre BNP Paribas Open 2019: Yoshihito Nishioka as the last Japanese and Ivo Karlovic as the last Croatian ( as well as the oldest player in the draw) in R16. A Lucky Loser plus a Qualifier from Serbia (Miomir Kecmanović + Filip Krajinovic ) longer ‘alive’ than Novak Djokovic. Men + women No.1s are out . . . 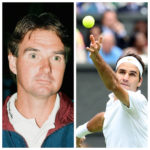