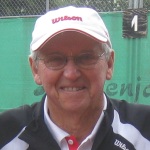 he male tennis player who owns the record of the most Grand Slam titles for a male (including all disciplines) with 28 titles (16 singles and 12 men’s doubles) told a story to Andreas Kuharszky about his first meeting with Asbóth. Australia that played … I was seventeen years of age and I was chosen . . .